Many well-known chefs share similar career paths: they start working in restaurants at an early age and then work their way up the culinary ladder. Not Gavin Humes. Early in his career, he was on a path to become a lawyer. He also became an entrepreneur, founding Innovative Event Solutions, a firm that helps non-profit organizations with their fund-raising efforts. But it wasn’t until he had some free time on his hands in the non-profit offseason, as well as the curiosity to learn something new, that he first ventured into a restaurant’s kitchen—to wash dishes. For free. Nevertheless, he was hooked. As Gavin puts it: “My passionate dedication to cooking and working in a kitchen began later in life.”

That first restaurant gig kicked off what has become a long and prosperous career as a chef that has led him to his current position as Director of Operations at Scratch|Bar & Kitchen in Encino, California. I caught up with Gavin to learn more about his non-traditional path into the culinary world—and to find out what he likes to do when he isn’t in the kitchen. These are edited excerpts from our conversation. Esther (E): Where are you originally from?

Gavin Humes (GH): I grew up in Moorpark, California, just north of Los Angeles. I’ve spent most of my life in Southern California and, strangely enough, my wife and I just bought a house in my hometown.

E: What did you want to be when you grew up?

E: Did you study something in school to prepare for that?

GH: I was on my high school’s debate team. I was competitive on the national circuit—which continued when I went to college at California State Long Beach. Over my four years there, I went through a bunch of majors: math, theater, dance. I ended up graduating with a communications degree with a minor in political science. I was then recruited to Pepperdine University to pursue my masters and coach the debate team. The plan was still to eventually wind up in law school. I even took an LSAT prep course.

E:  What happened that changed your mind about becoming a lawyer then?

GH: Like a lot of people, life took a few left-hand turns for me to get where I am today. At first, I stumbled onto a job working for a company that helped non-profits with their fundraising. I enjoyed the fact that I could make some money while doing some good in the world. Eventually, one of my coworkers and I split off and started our own company. It still operates today 14 years later. I do a couple of jobs every year. 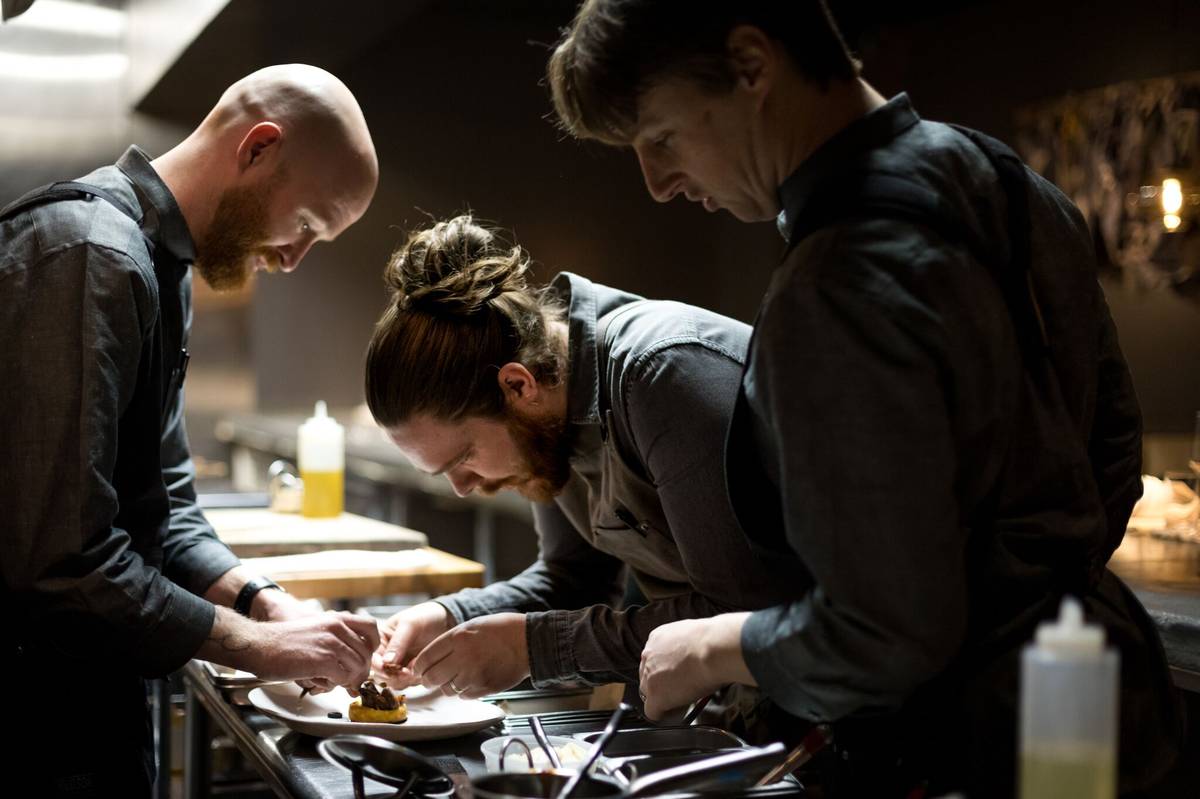 E:  That’s really interesting. How did that lead to a job in the restaurant world?

GH: Fundraising events in the nonprofit world are very seasonal. It can be busy from August to November, for instance, before it falls off until February. I would have a few months at a time with nothing to do. So, my wife began pushing me to do something with that time. I had always loved cooking, so I sent a few emails to some of the restaurants in LA that I really respected. I told them that I would work for free for a while if they gave me a shot. Eventually they told me they could pay me to wash dishes. That’s how I started in the kitchen.

E:  Did you have any role models or friends who inspired you to enter the restaurant world?

GH: My real inspiration was enjoying amazing food and wine. But as it turns out, my wife’s father was a professional chef in San Francisco in the 1980s and 1990s. My two brothers also now work in the culinary world. One brother is a private chef, and the other is currently in school studying nutrition.

E:  So, this was really just a hobby you wanted to explore?

GH: Yes, but I also have some ADD (Attention Deficit Disorder). I have a hard time doing jobs that become repetitive. Once I figure something out, I get bored. That doesn’t happen in a restaurant. There is a new flavor to taste or a new dish to develop. There’s always something else, which means you never get bored.

E:  How did you get your first executive chef job?

GH: I got that job like how I got most of my jobs—the person above me quit or got fired. I was the sous chef at Raphael Restaurant, where I was the right-hand man to the chef. When he left, the owners asked me to keep the kitchen running until they found a replacement. Six weeks later, they came to me and said they had noticed everything was running well, everyone seemed happy, and food costs were lower than they were before. So, they told me the job was mine if I wanted it. I said yes. Everything happened a lot faster than I expected, but I was excited for the challenge

E:  How did you end up at Scratch|Bar?

GH: I had been cooking around LA for a while at that point and had just gone through the experience of opening Tuccios, which was a neighborhood pasta joint. I wanted to get back into fine dining and was contemplating my next move. That’s when I saw a LinkedIn post from Phillip Frankland Lee, the owner of Scratch|Bar, who was looking for an executive chef. The food world in LA isn’t really as big as it looks. So, I reached out to him at the end of July 2017, and I started working there on August 1. Phillip and I were aligned in that we wanted to offer a Michelin-star worthy fine dining experience. The other nice thing was that the restaurant was only like seven minutes from my house at the time.

E:  Now that you’ve moved up to operations director for several restaurants, do you miss cooking?

GH: At times, I do miss getting my hands dirty cooking. Fortunately, I don’t have to work many services at night. So, I’ll invite family and friends over and cook for them. I just go to the grocery store and see what inspires me. Sometimes that results in a nine-course meal. I just get caught up in the moment. 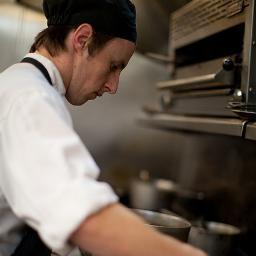 E:  Wow, that must be amazing. How did you first learn about wine?

GH: I love to read and learn about new things. I’m a bit of a nerd that way. And food and wine just go together. They work in harmony and elevate each other. I started sitting in on wine tastings with vendors. At first, I asked basic questions. And then, over time, asked slightly smarter questions. I guess you could say a lot of my knowledge came by using the Socratic method.

E: How have you continued your education about wine?

GH: The bulk of my knowledge still comes from getting to know winemakers and asking them about what they are trying to do with their process. I also just finished a program at the Sake School of America to become a certified sake sommelier. That involved some studying and taking an exam. But anytime I have a cocktail at a bar or a glass of wine at a winery, I’m always thinking: What do I want to eat with this? Pairings continue to color my preferences for styles of wine.

E:  Do you curate all the wines for all the Scratch restaurants?

GH: Yes, ultimately the buck stops with me. But we have a team of talented wine professionals, and we all work together. What usually happens is that we schedule a tasting and talk through the wines. They are all very involved in pairing those wines with the menu. I trust them to make the right calls. That also leads to better retention when people feel involved in the program and get to make the decisions.

E: That’s awesome. So, when you’re not tasting wine, what do you do in your free time?

GH: I watch a lot of hockey! But I also love to travel. Most of the time, that centers around food and drink. That’s why I am so happy about where I have ended up in my career. It’s never-ending and it’s always exciting. There are always new cultures to experience through food and drink. You can go just about anywhere and find something delicious to try. You just have to find it.